Beggars on city streets met me every day on the way to and from the subway in Stockholm 2003 and 2004. I heard the beggars phrases repeated over and over again, observed their labor for survival. Giving a gift seemed to perpetuate a bad power structure between the donor – recipient and maintain the distance between me and the beggars. Frustrated and annoyed by the inexorable requirement of attention and inability to close out a troubled reaction, I started to think about how a sculpture or work of art could arouse reactions in likewise inexorable ways, or maybe even a work of art that would help to change the unhealthy order of things. My work with O#X started with pragmatism. I had to construct a robot. I began by recording the beggars phrases and paying them for letting me do it, a way for me to contribute money not as a gift but as a replacement for something else. Exchange. Meanwhile I read Mauser’s book The Gift.

My interest was not particularly focused in the technical innovative ideas needed in building such a robot, nor did I have any budget for that kind of work. I had to solve what was necessary: find help from skilled craftsmen, so I turned to KTH and students under educationprograms with my idea.

The robot’s first shape was as a beggar and persecutor. This version was shown at Skarstedt Gallery 2004 at Kulturhuset in Stockholm 2005. The sculpture was developed in collaboration with students at KTH. The costume is made of velvet fabric printed with camouflagepattern quilted and merged bit by bit around my own body. A sculpture formed as womens underware / a bodycorset and in the same time an armor for fighters, warriors. This figure-robot-sculpture is both man and woman, or neither. The sculpture went its on way, it was annoying and it became The Inexorable.

O#X under work at IASPIS studio 2005. The robot and Goran Nordahl.

Undressed and developed. A speech synthesizer added, movements widens. You can send texmessages from cell phones to O#X and listen to messages sent to it aloud in the room. 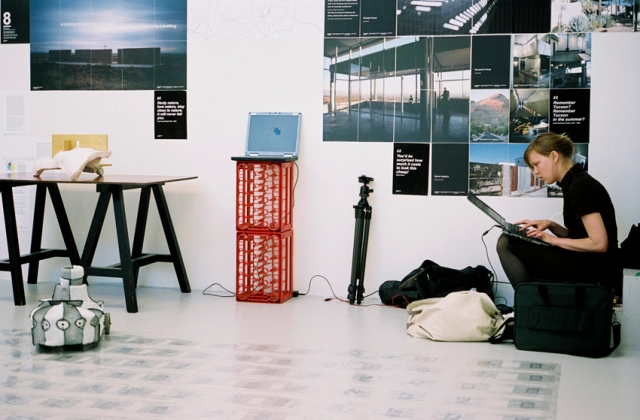 2006 the robot has a new costume, a small satelite robot coming anfd going to and from it, and a transmitter attached to it. O#X is crashing into everything in its way and its rampage in the room can be read on a screen. The robot is presented in different contexts: exhibitions, seminars, research symposiums in Sweden, Japan, Switzerland. below: Robotdrawing / Robotens vägar. 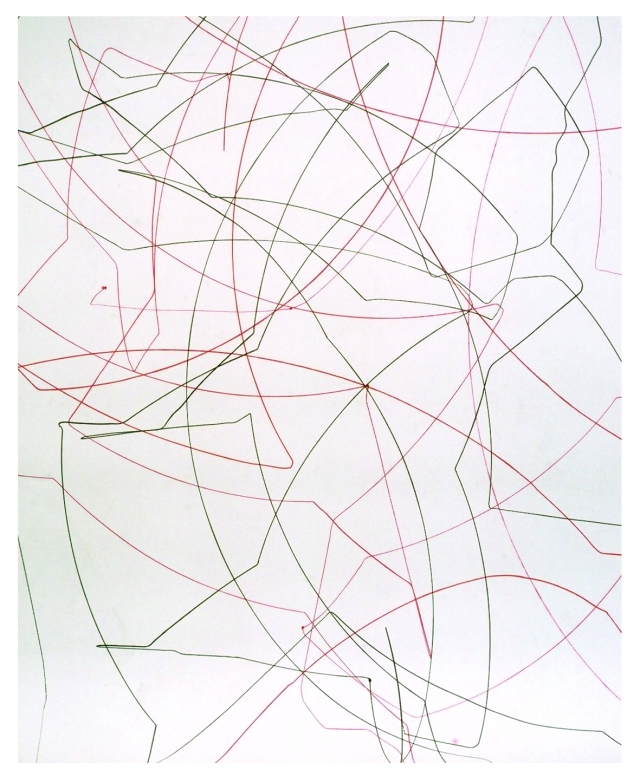 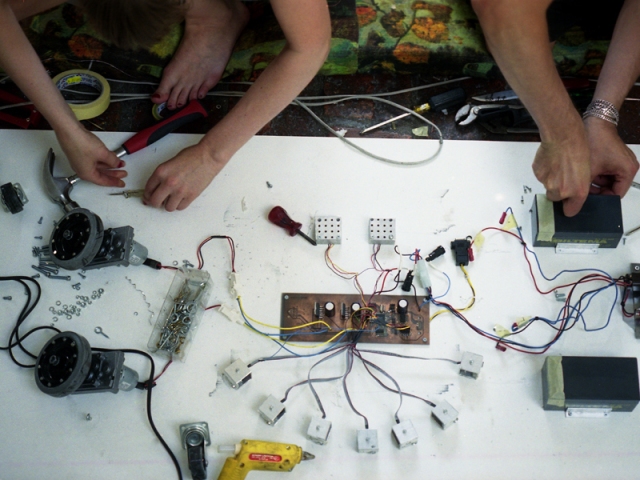 2009 the robot is deconstructed into its components and the deconstruction is documented. Before the deconstruction O#X performes its last movements writing its way on papers covering a space at the rooftop of my studio. Those drawings are the ground on which the story about O#X is told. The book O#X The Inexorable is published by Axl Books and is released 2010.

O#X The Inexorable by Ulla West. Published by Axl Books 2010

The robots circuitboard becomes the model for a series of patterns which I continue working with, called Circuitpatterns / Kretsmönster. see PRINTED MATTER