The dream of the flying rug explores the links between fantasy and reality. It’s about the carpet as object and place for visions and innovative ideas, also about the rug as the site for privacy and dreams. Resembling prayer-rugs and yoga-rugs or the oriental rug. Handicraft or/and art. Object or/and vehicle. Dream or/and pragmatic item. http://www.magiccarpets.org

Pilot testcarpet under work. Circuitpatterned testrug with integrated cables connected to small motors making vibrations through the rug while touched.  by the rug: Ulla West. by the camera: Malin Skjöld. 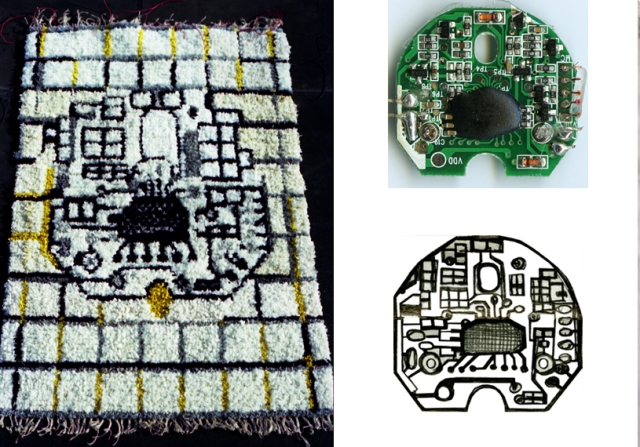 100×150 cm, handknotted in rya on a woven base. Tests with the rug takes place during a series of workshops in autumn 2010. 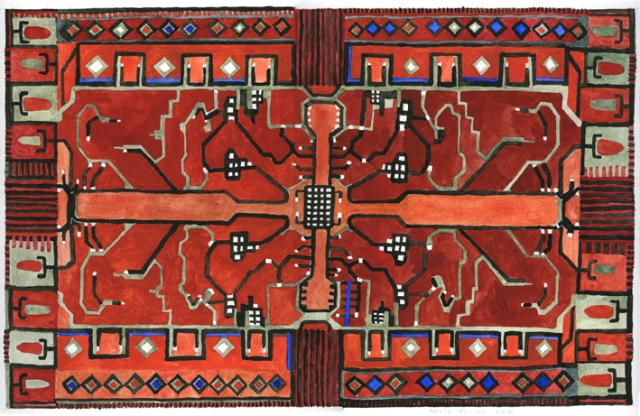 Radio Active Rug 2011 A rug inspired from oriental rugs to look; size, color, position, pattern and function. Handknotted in rya on a woven base. Size: 100×150 cm

The rya knot is the same as iyordes also called Turkish knot. The rug has emerged during workshops and seminars in collaboration between art and research Wireless Communication at KTH, Smart Textiles Borås Textilhögskola, Science Partners and others. Project Manager Ulla West and Ylva Fernaeus, lecturer at KTH and researcher at Mobile Life Stockholm University. 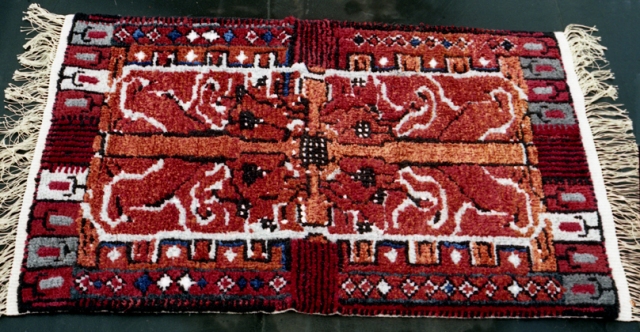 Radio Active Rug works with investigations around the conventional FM radio as resource and base for communication and culture. Traditional radios already include textile elements of its speakers and sound players. Radio stations contain textile materials into their microphones. We plan to make two rugs based on this simple concept.

A carpet will act as an FM receiver. People on the rug guide and influence the reception of the antenna in different ways. The second rug functions as a local radio station. Activities on and around the carpet becomes broadcasts to FM receivers in the neighborhood.

Magic Carpets/Circuit rug and Camo rug at Hallwyllska Museet, The Other Room 2010